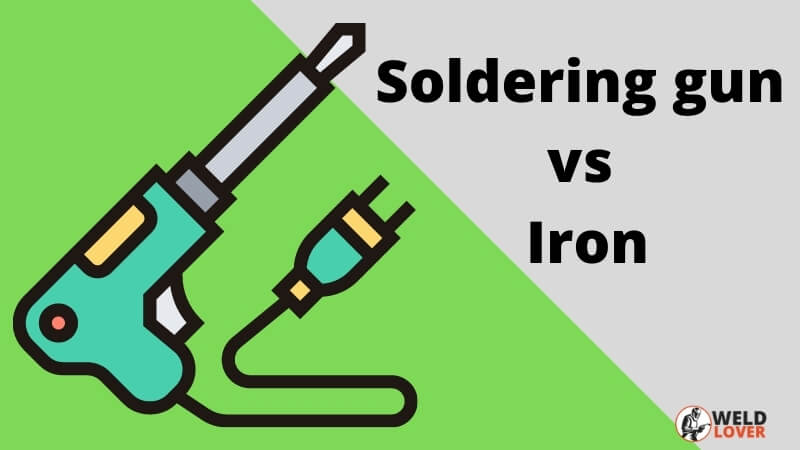 Beginner soldering enthusiasts often get confused about which one to go for, between soldering gun or soldering iron. The reason is both these tools are intended for the same job and have lots of differences and benefits over each other.

Mainly, the soldering guns are better for heavy-duty jobs because of their powerful features and durability. But on the other hand, soldering irons are exceptional when it comes to small and DIY soldering tasks due to their lightweight body, making them easy to carry out.

In this article, you will learn in detail about the soldering gun vs. iron. So proceed reading if you want to know the difference between these two tools in detail.

How does a soldering gun work?

Have you ever seen a drill? If yes, then you can imagine a soldering gun like that. Inside the soldering gun, there is a little transformer that functions to convert electric energy into heat which you can use to metal solder and then apply this molten solder to make a joint.

Soldering guns produce excessive heat, which makes them ideal for manipulation in the following areas:

Anything that requires more heat in contrast to soldering iron then soldering gun is ideal. Moreover, these guns are not suitable for use to solder standard electric circuits because they demand less heat.

Some benefits of using a soldering gun

The soldering guns are excellent for use in megaprojects as they operate on a power of 100 to 240 watts. Moreover, this high power consumption indicates how much heat they can produce, which a large project demands.

Unlike soldering iron, you don’t need to wait for too long if you need very high heat to do your work which is the primary benefit. Another benefit of soldering guns is that they can’t lose their heat if you are working under the air conditioner or in the cold weather.

The instant heat and cool mechanism of these soldering guns are highly efficient in converting electric energy into heat. That’s why they consume less electricity. Moreover, they automatically turn off when not in use this way saves your money.

Soldering guns can easily be taken to tight areas because they are operable through a single hand. Moreover, it enables you to get to hard-to-reach spaces conveniently because they have compact sizes as well.

Drawbacks of using a soldering gun

Most of the soldering guns come with a detailed list of instructions about using them. By touching the soldering gun, you can get an unimaginable electric shock other than burning yourself. It is so because the tip is made up of pure copper, which is an excellent conductor of electricity and heat.

As soldering guns are designed for more significant projects, they comprise powerful components that are heavy as well. Of course, the professionals don’t find these guns weighty because they are used to them, but a hobbyist might find soldering guns difficult to use for a long time.

The soldering gun tip is made up of copper, which melts quickly because the gun produces too much heat than soldering iron. That’s why you have to replace the tip multiple times during a large project. So, we advise you to carry some extra tips with you in this way you don’t need to resume your work to go and get tips from the market.

How does a soldering iron function?

The soldering iron looks like a pencil that you can easily hold from behind, which has a rubber coating to protect from heat. Moreover, the soft nature of rubber bestows comfort to the user’s hands. You can use a soldering iron like holding with one hand, but sometimes you need to use a second hand to stabilize the first one.

Other than that, they generate much lower heat than soldering guns because they don’t have a transformer like soldering guns. Besides, this less heat is perfect for doing small and DIY tasks. Also, the soldering iron will continue to heat once it starts because it doesn’t have any trigger or heat controller like a soldering gun.

The soldering irons are extremely light in weight and produce very light heat, making them ideal for use in the below-given jobs:

The low heat production of soldering irons is delicate for use in these domains. Moreover, their ability to solder electric appliances is incredible as they don’t generate excessive heat like guns which can burn the electric circuits.

Some benefits of using a soldering iron

Unlike soldering guns, they are much more convenient in use. Because you don’t need to replace the tip frequently, which is time-consuming and frustrating. From a safety point of view, soldering irons are brilliant as they don’t give you a shock when you touch their tip.

The compact body allows the user, especially beginners, to work with them for a long period without trying. If you can perform your time-consuming task with both a soldering gun or iron, you should select iron. The lightweight body will give you less fatigue than a soldering gun.

Drawbacks of using a soldering iron

As mentioned above, they are not capable of handling large projects as they have an inability to produce the heat required for industrial applications. Moreover, they have a very light body, indicating that a soldering iron has a piece of weak and poor machinery inside it.

Both soldering gun and iron have their pros and cons; therefore, there is no clear winner of the soldering gun vs iron debate. However, if you are working on a small project or a DIYer, then a soldering gun will not suit you. In that case, better go for soldering iron.

Similarly, if you are working on a big project which demands high heat, then a soldering gun will be appropriate for this job. Also, these guns are highly power-efficient, so don’t worry about electricity bills as these guns consume very little electricity.

We hope you found our article beneficial on soldering gun vs. iron.

© 2021 by weldlover.com is a participant in the Amazon Services LLC Associates Program, an affiliate advertising program designed to provide a means for sites to earn advertising fees by advertising & linking to Amazon properties including, but not limited to, amazon.com